Scatter Matrix:It is common to use the correlation to understand the relation between two variables in data science tasks. A scatter matrix is a estimation of covariance matrix when covariance cannot be calculated or costly to calculate.

LDA is a supervised technique of feature extraction used to find a linear combination of the availabel features to seperate the classes. LDA reduces the number of dimensions of the input feature vector by also considering the inter-class separation between classes. 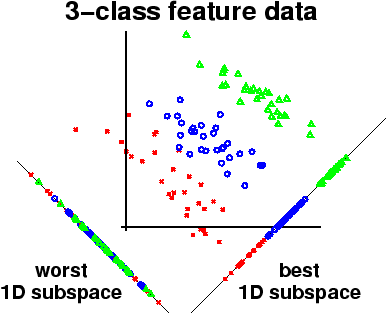 The goal of Linear Discriminant Analysis is to find most discriminative projection by maximizing between-class distance { Distance between the centroids of the different classes }and minimizing within-class distance {Accumulated distance of an instance to the centroid of its class}.

Instead of estimating $ P(Y|X)$ directly, we estimate $\hat P(X|Y)$: {given the response, the distribution of the inputs} and $\hat P(Y)$ {how likely are each of the categories} then we use Bayes rule to obtain the estimate

What is the difference between Naive Bayes and LDA?

LDA operates on continuous-valued features, it assumes the examples within one-class are normally distributed.Naive Bayes is explicitly modeling the probability of a class using Bayes’s Rule and make the assumption that the features are independent instead.